Designated as a cultural asset by Nagai City. It is used as a place for citizens' cultural and artistic activities.

[CLORSED] Monday  (if Monday is a holiday, the museum will be open and the next day will be closed) .

[ADDMISSON] free (There is a fee to use the facilities.)

If you want to use the facilities (Japanese)

The West Okitama County district office was built in 1878 under orders from Yamagata prefectural governor Michitsune Mishima.  It cost 4,518 yen and took about three months to finish.  The building was used as the district office until 1925 and after the county system was abolished it was used as the local office for Yamagata Prefecture until 1981.

The office building was designated by Nagai City as cultural property in March 1996.  It was renovated in 2003-2004, and re-opened in May 2004.  It was newly named Kozakura-kan and has been used for cultural activities by the locals. Of the existing district office buildings, this is the oldest in Yamagata Prefecture and the second oldest in Japan.

In the Meiji and Taisho Eras, a prefecture consisted of some autonomous counties, each of which was again made up of some towns and villages.  Yamagata Prefecture was divided into 11 counties.  This place, Nagai City as it is known today, was at the center of West Okitama County.  This district office carried out its function as the regional office of the national and prefectural government, guiding and supervising the subordinate local governments of the towns and villages.

Previous view of the building 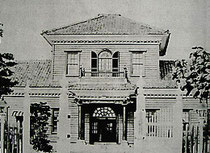 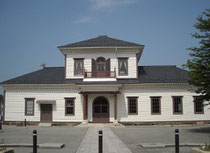 During the renovation, a stone-paved path was unearthed in front of the building, and it seems to have been made during the original construction of the building itself in 1878.   The path was reburied, but you can still find some reminders of the old days in the architectural techniques such as clapboard siding and dentils, and in the colored glass of the fanlight at the balcony on the second floor.